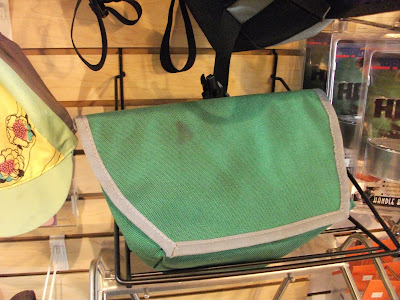 Well, someone's dirty greasy fingerprint has besmudged our last in stock Black Star hip pouch (we are due to get more soon!) 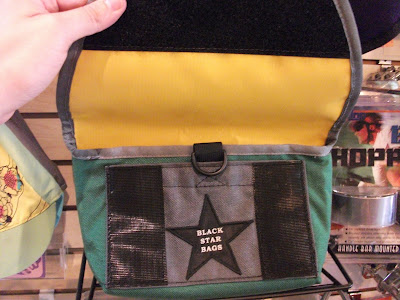 If you'd like your own Black Star hip pouch (green with yellow interior) it can be yours for $30.

And if you want to cover up the grease stain, you could get one of the Microcosm patches we just got back in stock! 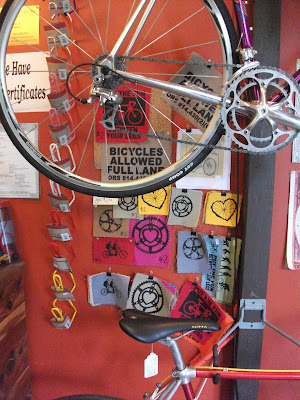 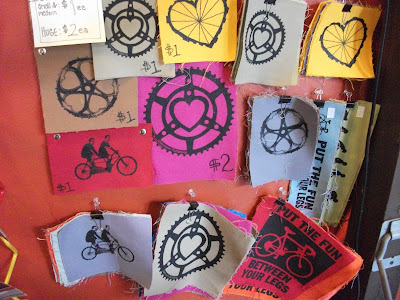 But don't get any dirty ideas. Rachel gets really sad when we don't make any money on stuff. So keep your greasy fingerprints to yourself!

voice of A Better Cycle at 6:33 PM No comments:

Why the heck are they riding on: Powell

Occasionally I'm a passenger in a car and I get to see all the streets I avoid as a cyclist.

At least once every car ride there is a person riding a bicycle on a busy car thoroughfare. I shake my head and think "WHY!!!" but in a strictly rhetorical fashion. The idea of knowing someone's "reason" for riding on a street like Powell makes me think of that Lewis Black sketch with the woman who says "If it weren't for my horse I wouldn't have spent that year in college."

I pretend it's just because they don't have a bike map of the city, or someone hasn't told them that: as a general rule, streets that are good for cars, are not good for bikes and vice versa. So in my little world, I imagine giving each of these persons one of the Portland bike specific maps, (many of them free, others amazingly detailed ), and they say "thanks bike map fairy!" and it's one less person riding on Powell.

With that in mind, we're going to shout out the occasional "Why the heck are they riding on..." post.  Just like the "WHY!?" in my head, it's a rhetorical question. With the idea that maybe it's just because they don't know any better, the post will offer a practical alternative.

So to fanfare and trumpets and cellos and the bicycling harper may I present:


Why the heck are you riding on: Powell ... when
Woodward and Clinton are just a few blocks away.

What do all those colors mean? Here is the bike map legend. Notice the white marking says "Major Street" add "FOR CARS" to the end of that and you know not to ride on those!

Labels: cars, why the heck 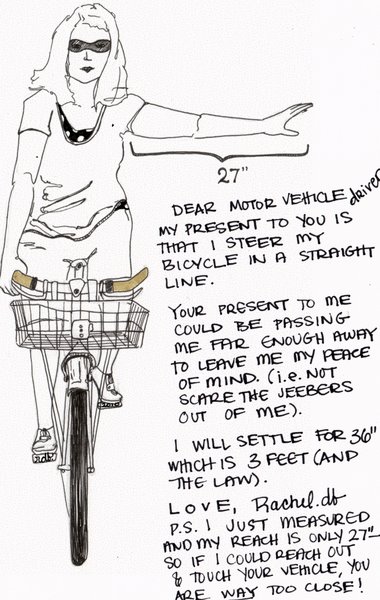 Mt. Tabor is not as big as I remember. by Rachel

"I'm coming too!"
"Then you need more breakfast."

One banana, two waffles with maple syrup later, Ian and I meet Clinton at 8:30am on his way to Mt. Tabor. Ian's riding his single-speed cross bike, Clinton is on his super-awesome Ahearne road bike and I'm on my Raleigh Super Course road bike for the first time this summer. (I don't count yesterday when I rode it home from the bike shop.)

I can think of two other times that I have ridden up Mt. Tabor. Once was when I lived in North Portland... on Atlas, my sturdy, heavy heavy Motobecane road bike, and once with Ian on our tandem. As you may guess Tabor, in my memory, is this really big hard super long ride that takes an entire day.

We live closer to Tabor now, so it's a pretty short ride over, though before we even get to the park gates I'm saying "Maybe I'll just go to the entrance and then home," because I am huffing and puffing and sweating and my legs are tired and I want to quit and we haven't even gotten to the park yet.

Ian says "No, this is just the warm up, you've got to get everything going, in a couple of minutes it'll pass and you'll be fine!" And Clinton says he's content to go as slow as we need to. And that's when I think about how I almost didn't even come because I didn't want to be the slow one holding everyone back (perhaps some latent childhood stresses in there) but how would I get any faster if I am just sitting on my butt at home? Next thing I know we're at the gates and I'm not ready to go home anymore.

We do some stretches, nibble on our nutrition bars, sip a little water, mount up and head through the gate. I haven't quite figured out how to manage my blood sugar on strenuous rides (since I had my gall bladder out last November, my blood sugar has been a little wonky). So far, and please forgive me if this is common sense to everyone but me, little nibbles all along the way has really helped.


So we start climbing, I'm in my third lowest gear because, from what I remember, I'm going to want lower gears later on. Ian and Clinton are ahead of me a ways, and I'm huffing, trying to breathe steady, enjoying the sweat, and thankful it's a perfect temperature.

We stop outside another gate and the boys check in "How are you feeling?" "A little quesy.. meh... mumble..." Clinton says "Here's as good a place to start to descend as any, that's basically the top"

So we go on. And the top is approximately 45 seconds later. And I think "We're at the top already!? I should have been in my lowest gear sooner, that was shorter than I remember!"


And then comes the fun part. You get to go down! That's my favorite kind of exertion, when the payoff is at the end. All this climbing and sweating and swearing and then you get to fly down a hill. It has been so long since I was mountain biking with the guys that I'd forgotten how much I like going down hill.


Also, I was happy to have my brass bell on my road bike. . .  a couple of cyclists zipped past a row of pedestrians and I slowed down and rang the bell "Oooh! That's loud" I said because it surprised me how loud it was. The peds said "Yes! Nice and loud! Thank you!" I love it when I ring a bell and the pedestrian says thanks, it's like a perfect little interaction.

My present to you is a bell to let you know I am coming. And their present to me is a very nice "thank you! (for letting me know you are coming and not scaring the daylights out of me by passing without warning and so quietly because your nice bike is so very quiet and I did not hear you coming, and you may know you have plenty of room and will not hit me, but it is still an unpleasant shock to me because I did not hear you.)"

At this point it's only 9 am, we're less than halfway down the hill, at a nice stopping point near one of the reservoirs and the guys have a half hour before they need to be toward the shop, preparing to open at 10am. Clinton says "Want to go again?" I say "I think I'll just hang out here. I'm feeling pretty good for my first time out." And they head back up the hill.

Then I think "Oh! I could get action shots!" So I ride up the opposite direction to try to catch them on their descent.

I find a sunny spot to shoot. It takes less time for them to circle around than I thought so I am scrambling to get the camera out of my pocket when Clinton rounds the corner. Can you see him? 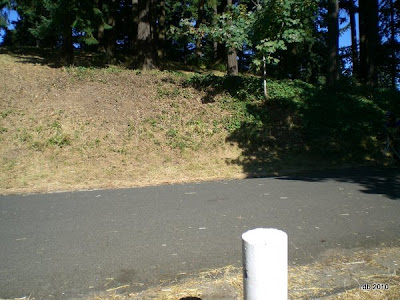 Then it's down some more hill, and through a bit of the city to get back to our neighborhood. I think we're planning on doing it again because, as we parted ways Clinton was naming off days. . . I'm not sure which ones he meant though because he named off most of them.
voice of Rachel.db at 11:09 AM 2 comments: 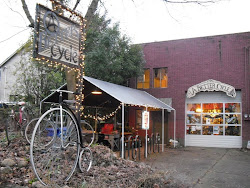